Amilcar Cabral‘s 37 quotes appear at the end of this article. Therefore, if you are familiar with his work and accomplishments, please feel free to skip this introduction to the legend. For the benefit of those who are unfamiliar with the life and work of Amilcar Cabral, I have put this intro together to contextualise his words and thoughts.

His full name was Amilcar Lopes da Costa Cabral. His nom de guerre was Abel Djassi. Some of the names sound Portuguese. That was the case. Cabral rose to prominence in the liberation struggle against Portugal’s colonisation of Guinea-Bissau and Cape Verde.

The people of Portuguese colonised Guinea took up arms to free their country from colonial domination in 1963 under the leadership of the African Party for the Independence of Guinea and Cape Verde [PAIGC].

At the time Cabral was both the founder and the Secretary-General of the PAIGC, including the small group that formed the original core of the Party.

Cabral became aware and conscious of the wretched conditions his people were living in while working as an agricultural engineer for the government of Guinea-Bissau and Cape Verde Islands.

His job involved travelling around the country and meeting people. From 1952 – 54, Amilcar Cabral had visited every corner of his country, preparing an agricultural census for the colonial administration.

This gave him unprecedented contact with the people and provided him with the opportunity to understand the problems the people faced and an intimate knowledge of the local terrain.

The detailed knowledge he acquired of his people and their situation provided the basis for the PAIGC’s revolutionary strategy.

Guinea did not have the necessary elements on which revolutionary movements in Europe and Asia had based their respective revolutions.

Therefore, a successful revolutionary struggle could not be based on any wholesale adoption of other revolutionary experiences or strategies. 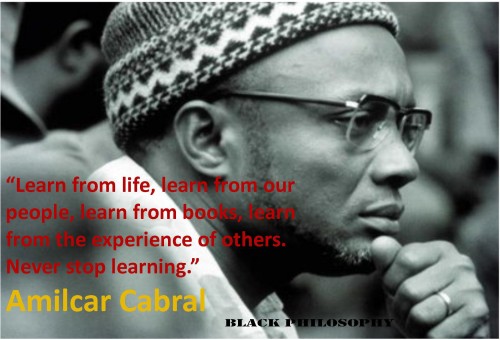 They needed a strategy based on African conditions; more specifically, on conditions within Guinea and Cape Verde.

Cabral was central to the creation of these revolutionary elements, creating the theory and articulating it to Party members, locals and others outside the borders of Guinea and Cape Verde.

Cabral weighed up the revolutionary potential of each group within his society. Thus the PAIGC began its long, patient process of clandestine political preparation in 1959.

The gravity of Cabral’s political theory grew way out of proportion to the size of Guinea when compared to Africa and its influence on the liberation movements on the continent.

Cabral’s political and revolutionary analyses extended way beyond the borders of Guinea and Cape Verde.

His theory and political analysis illustrate the importance of the need to study one’s own concrete conditions and to make the revolution according to those particular conditions, rather than relying on the experience of others, as valuable as it may be.

In addition, his revolutionary strategy was centred around the mobilisation of the people around practical material issues rather than indulging in vainglorious theoretical and ideological ideals.

It is absurd therefore to find African revolutionary movements or revolutionaries who swear blindly that they are Marxists, Maoists, Leninist‘s, Sankarists, etc. or a blend of all the aforementioned schools of thought.

Cabral was deeply influenced by Marxism but he was not a Marxist. However, he became an inspiration to national liberation movements and revolutionary socialists worldwide.

This was partly due to his brilliant scholastic ability to reinvent a new ideological school of thought, that took the works of Lenin and Marx and made them relevant to the realities Africa was facing at that time.

He was also influenced by Marxism and was a committed revolutionary, Pan Africanist theorist, feminist, revolutionary icon, anti-imperialist activist and the former leader of Burkina Faso.

Cabral’s legacy today is undisputed. He is revered as one of the greatest anti-colonial and anti-imperialist leaders of the twentieth century. He is remembered as a brilliant, devoted and fearless revolutionary.

He is acknowledged as the architect and mastermind behind the drive to liberate Guinea-Bissau and Cape Verde from the inequity of Portuguese colonialism.

It is fitting though that today we keep the flame burning for one of Africa’s greatest revolutionary theorist,  guerrilla fighters, an inspiring agitator, and an uncompromising internationalist.

We have a lot to learn from his methods and theory because the ideas set out in Revolution in Guinea transcend time and geographical boundaries or locations.

His ideas are probably more relevant to us Africans than Marxism is today because his ideas grew out of an analysis of the African situation and conditions in comparison to Marx whose analysis was based exclusively on Europe.

Amilcar Cabral’s legacy continues to inform the global struggle against imperialism and neo-colonialism while advocating for socialism.

His words, thoughts and ideas remain relevant in the struggle to eliminate oppression and exploitation and restoring humanity to all dehumanised people worldwide.

I have no intention of providing an in-depth analysis of this great visionary here today. That is the stuff for another day and article. In the meantime, enjoy his words, thoughts and ideas.

I hope you enjoyed Amilcar Cabral’s quotes above and learned something that will enrich you in many ways. You can check out quotes here by Steve Biko, Kwame Nkrumah and Thomas Sankara.

In conclusion, keep an eye open for the review of Revolution in Guinea by Amilcar Cabral coming soon.